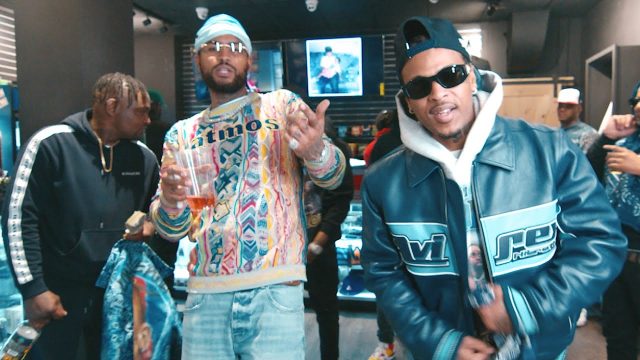 Half A Bird Lyrics
[Intro: G Perico]
(Low the Great)
(Is that Trey?)
Uh, yeah
I took a half an ounce, turned it to a half a bird
Wait, wait, look, look, look

[Verse 1: G Perico]
I took a half an ounce, turned it to a half a bird
At the deaf man house on 103rd
Yeah, uh, ghetto nigga with ambition
All I cared about was hustlin’, all I cared about was Crippin’
Eastside of the hundreds
The opps come writin’ on the walls and we go back bustin’
Bruce Wayne AKA Duron
Niggas dissin’ on the net, what is you on?
I call a spade a spade and a fade is a fade
A good look and real business is two different things
I be in meetings that niggas scared to talk in or even walk in
They said I wouldn’t get the budget, but I got it
I’m recouping like crazy
Big royalty checks attached to my statements
[Interlude: G Perico]
Man, we making movies around this motherfucker, you know what I’m sayin’?
Comin’ up from nothing, straight up out the ghetto
Having nothing, next day having a million dollars cash, what you know about that?
Only the real ones know, it’s only a handful of us, you know what I’m sayin’?
Pocket full of blue strips
Blue rag hanging out the left pocket
I know my nigga from Harlem can relate

[Verse 2: Dave East]
Thirty [?][1:17] around my neck, it wasn’t hard to tell (At all)
One of my closest caught a body, was never offered bail (Never)
I told his lawyer, “Try and appeal,” ain’t tryna work a deal (Never)
We never squealed, so let down no matter how you feel
Busting knuckles, couple fades just from association
Overanxious on the clock like a ho in Vegas
I chose greatness, so impatient for them blue strips
Me and a few crips
No, if you broke, we ain’t got no relations (Rollin’)
I watched unc’ smoke a dime out a soda can
I used to sip purple and yellow, I’m still a Kobe fan
Pussy slowed down outside, that shit on OnlyFans
Gotta go get it right now, might be your only chance
Half an ounce to a half a bird (Bird)
Star on the track, Captain Kirk, I just had it worse (Worse)
I know this bitch thinking Birkin if I go grab a purse (Nuh-uh)
Drop my new shit, pick up a hundred racks on merch (A hundred racks)
Perico, you know the root of evil Ben Franklin (Hundreds)
Ulysses Grant, Andrew Jackson got us impatient
Dead presidents make a nigga Larenz Tate it
With white paint on our faces, you see a Brink’s shaking
[Outro: G Perico]
Shoutout my nigga Shady Boy from Harlem
Shoutout my nigga [?][2:15] from Broadway
[?], Broadway
You know what I’m sayin’?
[?], Broadway
Shoutout my nigga C-Loc from Harlem
You know what I mean?
Shoutout my nigga TG from Harlem
LA [?] from the way
You know what I mean?
Fathead, Drew
Shoutout my nigga Dave East
Nigga, Harlem to LA, we gettin’ it, man
Million dollar shit, baby