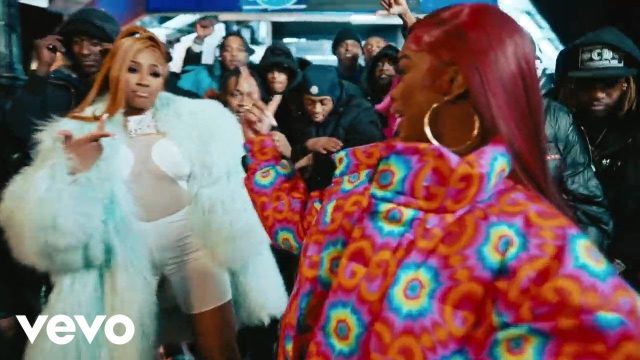 [Verse 1: Yung Miami]
Not nann’ bitch in the world look like this (Nann’)
G5, hair wrapped up, pop a iced bottle of the Cris (Ah)
Bitch, I was really broke, fuck I look like tryna’ go and diss? (Fuck I look like?)
Fuck I look like sendin’ shots and not makin’ every hit? (Huh?)
Bitches gettin’ shit confused, go and check the news
Pussy real tight, got a good squish
Fat lips only, got no lisp
Big AP on a small wrist
Coulda paid for it but I rather him (Yep)
Bitch, I’m on ten, keep the lights dim
Top notch bitch, far from a den (Bitch)

[Verse 2: Fivio Foreign, JT]
Yeah, look, step in the buildin’, I walk through the—
She get wet when I talk to her (Yeah)
It’s probably just me and like four shooters
Every bitch that I’m meetin’, they all knew us (Yеah)
Every nigga you run with is all losers (Huh)
All this ice on my niggas likе we all jewelers
Bust a move and I’m orderin’ more movers
(Bust a move and I’m orderin’ more movers)
Ah, yeah, ha, woo, woo, yeah, yeah, look
I get the drill done (Ah)
You niggas gon’ make me drill somethin’
Another nigga dead and I don’t feel nothin’ (Brrt, baow, haha)
Yeah, look, my niggas will pull up and kill somethin’ (Skrrt)
This is not a movie, this is real guns (Nah)
(This is not a movie, we got real guns, baow)
Huh, hop in the V (Skrrt)
Go to the hood and the topic is me
When I was down, I was broke but I told ’em I knew I’d be rich by the top of the week
Niggas is talkin’ ’bout we alike, I’m like, “Nah, nigga, you just copyin’ me”
Boy, I been outside for a long time, pussy, you just got in the streets (Ayy, ayy, City Girls shit, ah)
[Verse 3: JT]
Yeah, say, you gotta pay for this (Nigga, fuck you thought?)
Say, you gotta pay for this
Ain’t no free nuts
Nigga better get his cheese up
Suck the pussy like a freeze cup
Eat it while I hold my knees up (Ah, JT)
I just got my hair did to shit on hoes like it’s a hobby (Yeah)
Every bitch that hate on me got an ugly face and a botched body
I ain’t goin’ there, that’s an opp party (Nah)
I’m a bad bitch, I’m a Black Barbie (Haha)
Any nigga I call “bro,” they fuck bitches and catch bodies
Ain’t no more playtime, they like, “Cut the lights,” it’s daytime
I told my nigga he better act right ’cause to fuck with me, it’s a wait line (Mh-hmm)
Bitches better move when I come through
Fine short thick shit, I’m like 5’2” (Ah)
Don’t wanna kick it or I don’t wanna be cool (Ah, ah)
Beefin’ with who? Bitch, I don’t know you
I don’t cock block or cop pleas
I’m the baddest bitch on your newsfeed (Ayy)
Y’all gossiping, but who the news feed?
(Y’all gossiping, but who the news feed?)
I’m in the sky box, you in the nose bleeds (Damn)
Fly bitches need privacy
Shy nigga say “hi” to me (Hi)
Broke boys say “bye” to me, period

Whiskey Myers – Other Side Lyrics