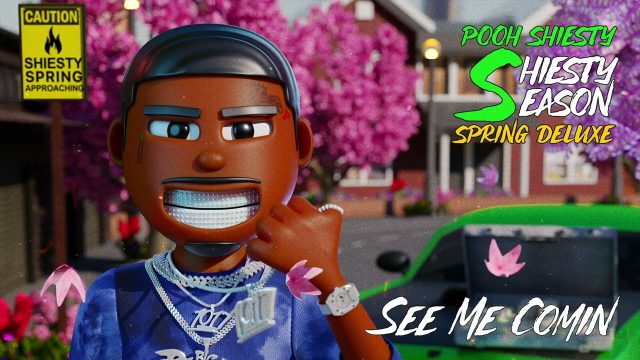 If they don’t come with code to the safe, no way we leavin’ now
We up our doors off on their block, ain’t no playin’, we stakin’ out
Then I started sprayin’ ’til you get close, you see some come up out they house
We tapped the one, but I want both, he tried to run, we picked ’em out
Cool to be runnin’ with them until you get caught out of bounds
I еven got glue on my hands, I still can’t put thesе choppers down
These niggas backdoor on they man, then that body, don’t even count
No, you can’t relate to my pockets unless you broke four money counters
Three times the money, took me thirty minutes, ran through a hunnid thousand
Start walkin’ shit down at fifteen, it wasn’t no more shootin’ at houses
Turned sixteen, I’m with my Glock, and, bitch, my folks had kicked me out
Grandma stay deep in Westwood, I ain’t goin’ to school, I ain’t from that side
I ain’t had no choice, sent me back to the South, now we in Central High School
I’m seventeen, it’s 2017, Rico was still alive
So seven day, pass out that ten, don’t forget when you felt that fire
I held my stick, tried to start hissin’, I couldn’t shoot ’cause I was shot
Lucky it went in and out, but the blood wouldn’t even stop
30, don’t pull over, get straight to that hospital, I’m hot
They check me in, try wrap me up, start askin’ questions, I snuck out
Got back in the truck, pick it back up, I need somethin’ done, I can’t lay down
Ayy, ayy, grab them sticks, ask when you in my city
Go pop out lookin’ for problems, this shit must love me, I’m always with it
This nigga opp pack in a blunt, still the same nigga, I’m up in a minute
A iced-out plaque ’cause it just went platinum
Got Ms in my teeth, new set look different
Bitch, it ain’t no fee next time, you the first one to pay attention
They ask me why I’m always quiet, so when I talk, you pay attention
Lost Trey Day, goin’ on four years, shit still feel new, can’t get no heaven
I went got Lil T on my face, when you see me, he right there with me
No, I can’t stop thinkin’ ’bout bro, shit cut me deep, thought I was scarred, but that was different
I done saw shit you’d never see, pour a four just to dodge my feelings
I had to face everything came with the streets, goin’ out a G, they know I’m with it
They don’t think you safe ’cause you got chopper on you, the bitch better have six
I already set up his partner, they know that this shit get sticky
Championship ring sittin’ on my middle finger, match the “Blrrrd,” on my pendant
Stay killin’ shit, drippin’ in fashion, Amiri shoes fit a lil’ different
I learnt the game watchin’ my OG and ’em whip dope up in the kitchen
Don’t up the chop’ if you ain’t gon’ blast, I put all my men in positions
Don’t no member get left behind, yeah, I’m bringin’ everybody with me
And to all the ones in the sky, keep standin’ on side me ’til I finish
The reason I keep wantin’ to slide, I can’t let myself get dizzy
Bought a new baby Glock-9, took out the clip, slap it in a fifty
I might get caught with your favorite rapper baby momma with me
With Chrome Hearts from the hat to the socks, where I’m from, this shit drippy
This Memphis Tris darker than Akon, go grab a cup, shit taste ridiculous
Two hunnid K, all blue, now I done stretched out my Amiris
Can’t put no ho on no jet, get you a one-way flight with Spirit
Put Shiesty name on anything, ain’t shit gon’ happen, that’s secured
Two switches up on me now, do it look like I need security?
[Outro]
Blrrrd, blrrrd, blrrrd, blrrrd